What is the first thing that comes to mind when an executive hears the term "blockchain"? Very few C-level managers in the food industry understand it properly or can name some of its benefits. Most associate blockchain with the hype of cryptocurrency and the negative connotations surrounding it.

Today, I want to give you some of the most beneficial use cases of blockchain, but for a more comprehensive list, download our guide to blockchain in the food supply chain.

Here are 7 points you really need to know before pitching your blockchain project to your boss.

1. Window of Opportunity: We Are Still Early In The Hype Cycle And Early Adoption Is Key

Blockchain can provide early adopters with an unmatched competitive advantage. In certain cases, it can mean the difference between becoming the new normal and going out of business — like Netflix vs. Blockbuster.

While blockchain is increasingly becoming a proven concept in other industries, in the food supply chain, this emerging technology is still in its early days. If you look at the Gartner Hype Cycle, its adoption just entered the Peak of Inflated Expectation — meaning blockchain is nearing mainstream adoption, but getting carried away with over-exaggerated expectations is still easy to do.

While investing at this early stage still has significant risks, the benefits of being an early adopter can, by far, outweigh the risks — if done right. With the food supply chain connecting our world more than ever, waiting for mainstream adoption in the Plateau of Productivity might be too late for a sustainable competitive advantage.

One of the biggest fears about being an early adopter is the cost, and while implementing blockchain technology will come with some investment, the cost is quickly made up by the tremendous increase in supply chain efficiencies and related savings. In addition, today's customers are willing to pay a premium for brands that can prove traceability, sustainability, and fair-trade practices.

2. Blockchain Is Here, And Here To Stay

Blockchain is coming to a food supply chain near you, whether you want it or not. While most CIOs (77%) claim their enterprise has no interest in investigating, developing, or implementing blockchain technology, that is (according to Gartner) a dangerous attitude, especially considering that a major player like Walmart has already done a proof of concept using blockchain with the IBM Food Trust.

Blockchain already has a proven track record in the financial services sector and, as stated earlier, is already at the Peak of Inflated Expectations in the food supply chain. It is also making waves in the pharma space, voting, and over 50 other industries. With so many diverse industries already successfully using blockchain, the future of widespread use in the food industry looks inevitable.

When emerging technologies make big waves fast, they can be seen as a magic pill — just swallow it and everything changes overnight. Although implementing blockchain can give you a competitive advantage, it takes time, and you can't do it alone.

Implementing blockchain requires company-wide changes in technology and business processes to ensure compatibility and achieve the most potential. However, to fully realize how powerful blockchain tech can be, you need to get your vendors, suppliers, distributors, etc. on board with it as well. In the case of the food supply chain, blockchain is only as strong as its weakest (or missing) link.

Blockchain provides many benefits such as tracking, trace-backs, etc. However, its potential skyrockets when combined with smart sensors that can measure temperature, shock, etc.

If a vehicle shipping a perishable item, such as raw chicken, starts to exceed the threshold temperature, you can get real-time notification to take action (switch trucks, repair, etc.) to prevent the shipment from spoiling so it can still make it to its destination and onto the shelves. 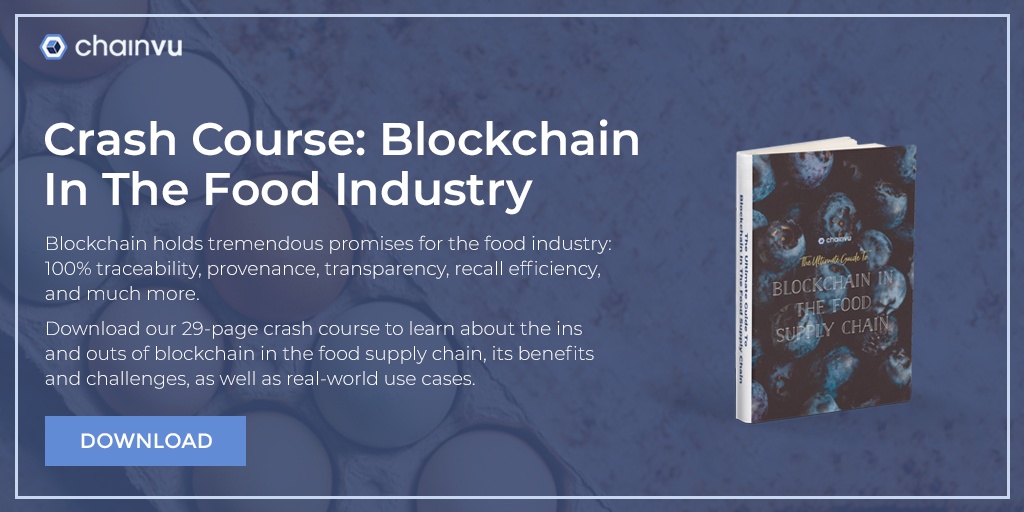 When shipments use blockchain with smart sensor technology, the process of completing a smart contract can start and finish quickly, once the goods arrive at the final destination.

Additionally, this same information can be used to solve contract disputes. For example, if the product is being unpacked onto the shelves and is found to be spoiled or damaged, then the blockchain and smart sensor data can determine if this happened en route or after delivery.

Outbreaks of E. coli, Salmonella and other foodborne illnesses are occurring far too regularly in today's food supply chain. Having the ability to quickly trace the bad batches and distinguish them from the good can translate into saving not only money, but your company's reputation as well. Nationwide recalls, like that of romaine lettuce last year, which forced supermarkets to pull all romaine off their shelves, can turn consumers off your product or even your company altogether.

Using blockchain technology, Walmart was able to trace back a pack of mangoes in 2.2 seconds instead of 7 days. Having this rapid degree of traceability on your product lines can stop an isolated outbreak from becoming national news.

When blockchain is implemented through your entire supply line, from the origin(s) of the product, through processing, packaging, distribution point(s), and final delivery, you can have almost real-time status updates during that whole journey.

Details like these and the ability to act on them can allow a company to divert a shipment from one store to another. For example, in the case of a weather emergency, products can go where they're needed, or can avoid being sent to an area that is impassable or a store that is closed.

Presenting a blockchain-based solution to your boss might seem like a snake oil sales pitch, but it is hard to argue against successful proof of concepts and use cases. Overlooking this technology can leave your organization in the dust, while trying to use it to solve every business is a pipe dream. Using the above points, as well as our guide, should raise the interest and excitement level of your C-level manager.

As the CEO and founder of Chainvu, Bob is passionate about the safety and sustainability impact in the food and pharmaceutical supply chains. Did you know that 35% of food in North America doesn’t make it to the table? Chainvu gives the entire supply chain actionable product visibility and 100% traceability of products live at every step. Our solution is embedded and proactive, providing immediate notifications to prevent damage, reduce labour & waste, and improve product quality. Prior to Chainvu, Bob has over two decades of experience as a serial intrapreneur and entrepreneur achieving global leadership in digital networking products, and large-scale communications services. Bob holds a B.S. in Electrical Engineering from the University of Waterloo and an M. Sc. in Business from the Sloan School at MIT.

Fill out this form to schedule a 30-minute, no-strings-attached consultation to find out how you could leverage blockchain in your supply chain! No run-of-the-mill sales pitch here.

Subscribe to our blog to get instant updates directly delivered to your inbox.